Cameron Jordan talks trash to Tom Brady, but can the Saints back it up? (1 Viewer) 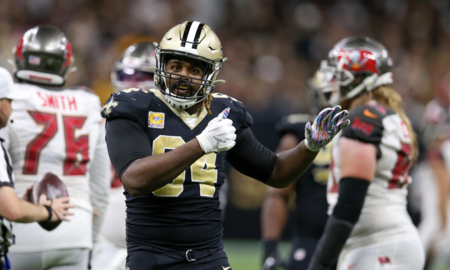 Few NFL players enjoy chopping it up with the media more than Cameron Jordan. The New Orleans Saints defensive end appeared on “Good Morning Football” this week on NFL Network to preview the 2020 season and lay out his expectations, starting with a Week 1 kickoff against Tom Brady and the Tampa Bay Buccaneers.

“They’ve got the second-greatest quarterback of all-time, right behind Drew Brees, and now we’ve got a head-to-head two times a year,” Jordan said, via NFL.com. “We’ve got our work cut out for us and then they have an addition, you bring in Rob Gronkowski and LeSean McCoy, you already had two 1,000-yard receivers in (Chris) Godwin and Mike Evans.

“This is a team that’s fighting for second place.”

That’s bold talk, which isn’t new for Jordan (who famously shipped bottles from Jordan Winery to Cam Newton after his Saints swept Newton’s Carolina Panthers). But will the Saints defense show up in Week 1? ...