Can anyone keep up with the New Orleans Saints? (1 Viewer) 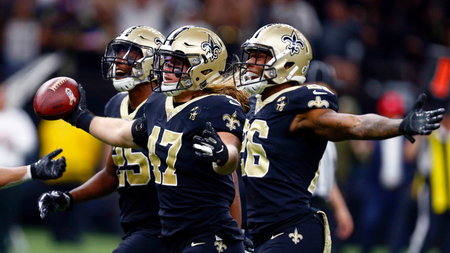 Michael Thomas turned upfield, with nothing but open turf in front of him and Rams cornerback Marcus Peters already two steps behind. It was all the time Drew Brees needed – and all the room the Saints would need to leave the rest of the NFL in their dust.

Seventy-two yards later, the Saints had not only slayed the unbeatable Rams, but stolen their pedestal at the top rung of the league. Even before Thomas’ shootout-winning sprint, as the rest of the world – this writer, included – raved about how the Rams were rolling, the Saints were already laying claim to that lofty honor. And last Sunday, while the world watched, New Orleans finally had the chance to flex.

After falling to Tampa Bay in Week 1, the Saints won seven in a row, and not just by beating up on the bottom of the league. Over the past six weeks, the Saints strode confidently past five potential playoff teams (Falcons, Washington, Ravens, Vikings and Rams). Only two of those games (Ravens and Falcons) had even been within a score.

No NFL team is hotter halfway into the NFL season. That much is indisputable. But as the Saints head into the second half as overwhelming Super Bowl favorites, it’s worth asking: Can they really keep this up? ...