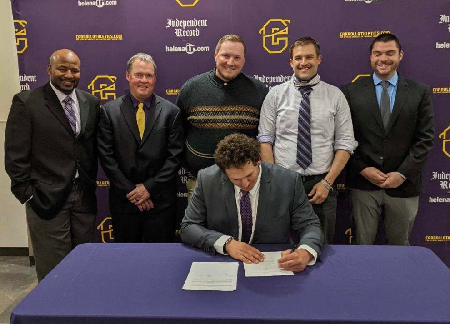 HELENA — Carroll’s First-team All-Conference offensive tackle Alex Hoffman has signed an undrafted free agent deal with the NFL’s New Orleans Saints. He will receive a $1,000 signing bonus, according to multiple sources on Twitter.

“Just really appreciate all the work that [Carroll's] coaching staff has done for me,” Hoffman said. “Without them, the coaching staff and the players, I wouldn’t have had this opportunity. I’m really grateful for them.”

Hoffman, who was a team captain for the Saints during his senior season, helped lead Carroll to its first Frontier Conference Championship and first appearance in the NAIA Football Championship Series since 2014.

“He’s the most athletic lineman and intellectual lineman I’ve ever been around,” Saints head coach Troy Purcell said. “He’s got all the traits and he’s the hardest worker out there...His ability to change direction and do the things he does with his feet -- he’s a special player. That’s why he gets this opportunity to get to that next level and prove himself. It’s pretty special.”