Colts, Steelers And Saints Likely To Have Close Eye On Mac Jones At Senior Bowl (1 Viewer) 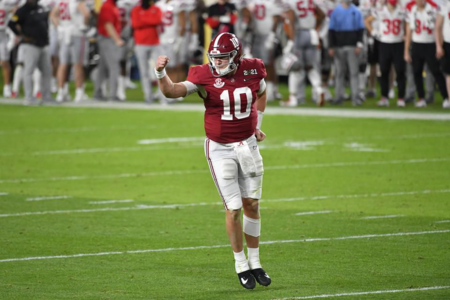 The 2021 Senior Bowl gets off and running on Tuesday, providing NFL teams their only chance to see a collection of draft prospects on the field at the same time with the public health crisis having led to the cancelation of this year's Scouting Combine, and the player with the most eyes on him is likely to be Alabama quarterback Mac Jones.

Jones is not the best prospect in Mobile this week. That is his Crimson Tide teammate DeVonta Smith, who will take part in meetings and interview with teams but will not go through on-field drills because of a dislocated finger.

In terms of players who will be out there at Hancock Whitney Stadium, Jones provides the most intrigue.

At least four quarterbacks are anticipated to go in the first round of this year's NFL Draft and Jones is in a position to make it five following a stellar lone season as Alabama's starter, which saw him named a Heisman Trophy finalist and lead the Tide to National Championship glory . ...