Coming Home Friday! | New Orleans Saints - SaintsReport.com
Menu
Log in
Register
Navigation
Install the app
More options
Change style
Contact us
Close Menu
You are using an out of date browser. It may not display this or other websites correctly.
You should upgrade or use an alternative browser.

Offline
That's right, I'm coming home to a long planned game (Section 103, Row 30) this weekend. I live here in the Cincinnati area (Since '88), but die-hard saints fan since I was a child. In fact I won't even go to the sold out Bengals games if given the opportunity, unless there isn't a conflict with the Saints games (Gotta love Sunday ticket!). Anyway, I'll be coming in this weekend, escorting a few Bungle fans from work. I've not been to the dome since a teenager for a Saints game and wanted some insight. As far as I get it, most folks hang out in the quarter prior and after the games, instead of tailgating. So, how far is the walk to the Dome from the Quarter? Is there normally a big crowd commuting that route? What is the best route to take? Thanks much and Who Dat!

Offline
The walk from the Quarter to the Dome, a hop skip and a jump, maybe 8-10 blocks, about 10 minutes(I walk fast). Its easy to get the Dome from the Quarter all you gotta do is either stay on Bourbon or any of the streets just above it Dauphine,Burgundy or Rampart and just walk across Canal st until you hit Poyadrs st....Once you hit Poydras hang a right and walk up a few more blocks and you can't miss the Dome....

Or easier, all you gotta do is just follow the black and gold jersey's depending on when you'll be there you'll see where everybody is walking and what direction. There's some people that hang out right along the ramps right next to the New orleans center right at the entrance and they usually have a band playing....Enjoy yourself it'll be fun esepecially if we win...
Last edited: Nov 14, 2006

Offline
I will be attending my first Saints game this Sunday and I'll one section to your left in 106 row 10! I'm so PUMPED RIGHT NOW! I can hardly wait until this Sunday. I've been following this team MY WHOLE LIFE. And have never gotten to a game. Even my wife from New Jersey beat me to seeing the Saints live (she say the Colts/Saints game where Manning threw 18 touchdowns against us). Hopefully I will have a better game to watch on Sunday.

Offline
I usually park in the Chase/UNO building and walk to Rampart right past the Holiday Inn(uaully where some visiting fans and busses are parked) and City Hall and then hang a right on Poyadras.

Offline
after the ravens game, which did not come out well for us, the area places i went to were filled with baltimore fans. lots of them. spending lots of much needed big money. and those i spoke with said they were happy to do so. hopefully, cincy will also send alot of fans this way. and the green, of course. the realtors convention seemed to have perked up alot of the local retailers and small businesses this past week. let's hope our game this weekend (DIFFERENT result, of course!) does the same. go nola! GO SAINTS! 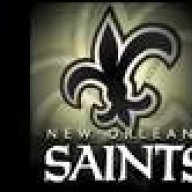 Offline
Should have plenty females this weekend because of a jewelry show. I think it's this weekend. They say it's for the show but it's mainly to go party.