Offline
i agree with almost all of your assessments except Davis and Vilma are not a push to me. Vilma was more elite…Got the defense into the right call and was very good against both the run and the pass. Davis is a leader too, but Vilma changed the whole dynamic of the defense.

RJ in Lafayette said:
I will take your word on the Super Bowl odds in 2009. Our 2007 and 2008 seasons were very average. But in the summer of 2009, there was a buzz locally that the 2009 Saints could be very special--I have Jim Henderson specifically in mind.
Click to expand...

Yea, I got 18-1 odds to win the NFC the day after we signed Gregg Williams, which I guess would have been early spring. It was 35-1 Super Bowl odds but that didn't seem like as good of a deal since the Colts/Pats were the clear top teams at that point.

Looking back, we signed Sharper and Greer after that which turned out to be huge, but probably didn't move the needle much in Vegas.

Then the first team was absolutely smoking everyone in the preseason in a way we had never seen before. So there were reasons to believe it could be a really good team.

As for 2008, we were 7-9 but had a huge point differential, with some blowouts over good teams, and ridiculous last second losses to bad teams. It was a really well stocked team with a couple big holes in special teams and the secondary, which were addressed perfectly in the offseason. 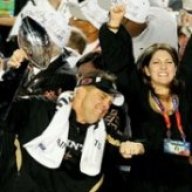 Offline
Anytime you end up the Super Bowl champ and 31 other teams don’t, your “team” was complete and played complimentary football at the highest level.

We can always compare position by position, but that fails to acknowledge scheme and fit.

When does Saints Training Camp start?