Offline
I know we as fans have been plagued by PI or holding calls late in the game. In most cases, we normally get the short end of the stick. It's very frustrating, especially when a bad call can literally change the outcome of the game.

I believe they should implement a rule to where judgement calls such as PI/Illegal contact or holding, should get challenged in the booth or to the center in NY. This should happen when the game is under 2 minutes.

What does everyone think about?

Offline
You can challenge a penalty in the CFL, right?

Offline
I think you should be able to challenge one penalty a game. Maybe not every call but definitely things like the catchability of a pass on PIs should be subject to review.

Offline
That call on Craig Robertson was terrible. I think there may have been some contact (very minor) but the ball was not catch-able. The receiver had zero chance to even get a hand on the ball let alone catch it. Refs blew that one.

Also the holding call a few plays before that... that small tug on the jersey did NOTHING to the receiver. Didn't slow him down... didn't turn him. Didn't impede him from getting to the ball.

I think there is. The teams send tape to league after every game, and while the league may respond and say "hey, we screwed that up"... there is nothing they can do except say "I'm Sorry".

I think officials get fined for blowing calls... but that's it. We don't hear of this because they don't want the public to go ballistic on the refs for screwing the teams on some calls, but they do "punish" the refs for bad officiating.

The officials in the Okie St game got suspended for their decision to allow that Hail Mary/Hook and latter.

I don't have a problem with it being spot-foul. But since it can be such a huge game-changer, make it reviewable. 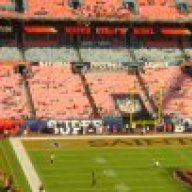 Saint Droopy said:
You can challenge a penalty in the CFL, right?
Click to expand...

Yes you can and I think the NFL would be more than wise to go to the same rule.

Online
Didn't they say in the game that the league office has the feeds and the. Ability to monitor calls now?

The fact that the NFL, a multi-billion dollar "non-profit" doesnt have full time refs yet is mind boggling.

Can you imagine refs in their mid20s-30s, who train year round? Instead of retired lawyers and doctors doing it as a hobby?

DaveinCoalinga said:
Didn't they say in the game that the league office has the feeds and the. Ability to monitor calls now?

They have them... that's how they're able to handle reviews. The problem is the league has no say-so in penalties especially judgement calls. Whatever the call is... it stands. Which should be reviewable especially in cases like that last penalty. The league office could have buzzed down and said the ball was not catch-able.

Offline
Good idea but then the league needs to influence the outcomes of games. I thought about the 2 points conversion after the game and wonder what would've happened if Crabtree didn't catch it. Would they have all PI on the Saints? I think he would have.

DaveinCoalinga said:
Didn't they say in the game that the league office has the feeds and the. Ability to monitor calls now?

Yes and it made no difference. The refs are untouchable. They can do as they please or do what they are told to do without any consequences. Oh you dont get a playoff game? no worries, carry on. They dont get fined for bad calls. They supposedly can get fired but Triplett and Hochuli are still officiating after years of horrible calls. Nothing will ever change in that department.

Offline
The owners and the commissioner and his minions are untouchable.

If you're a player, there's PLENTY of accountability, if you use the wrong color tape, or salute funny, or celebrate a touchdown or express yourself in any unapproved way.

Offline
I don't know about you guys, but literally after every big play we make on defense (hell on offense too) I find myself holding my breath in anticipation for a flag! It is crazy how much this crap happens these last few years, and NFL football games, especially the Saints, are becoming unwatchable.

Even the players are now conditioned to scan the field after every big play looking & praying that a flag wasn't thrown. It is a real shame how many times the outcome of NFL football games are now changed due to bogus, ticky tack at best, penalties.

I hate to say it, but I knew without a doubt that they would score on that drive because I knew without a doubt their drive would be extended by penalty until they did score. This was a given and it really sucks being subjected to this every weekend during the season. If I wasn't such an ardent SAINTS football fan I would stop subjecting myself to this BS every Sunday! UGH!!
Show hidden low quality content