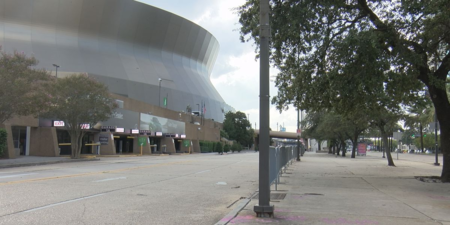 NEW ORLEANS, La. (WVUE) - Saints Sunday looked very different with only family and friends allowed inside the dome for the game. Businesses in the area say without fans, it was almost painfully noticeable.

It’s hard to believe these are the scenes of a Saints home game outside the dome: there’s no music, no cheering, no fans in Champions square, and no tailgaters to be found.

“A year ago, right now the streets would be flooded you won’t be able to cross Poydras because there be fans everywhere,” Allen Larkin said.

Even visiting fans were at a loss of where to go.

With approval from the state, the Saints were initially preparing to host some socially distanced fans in the Dome against the Packers until New Orleans' phase two status prevented that. The Saints instead hosting more than 700 family and friends of the team. But that’s no consolation to Who Dats.

“It’s very sad, very sad but we’re just trying to have faith that things will change before the end of the season and go back to normal and we can have a good time again,” Julie Helmstetter said. ...