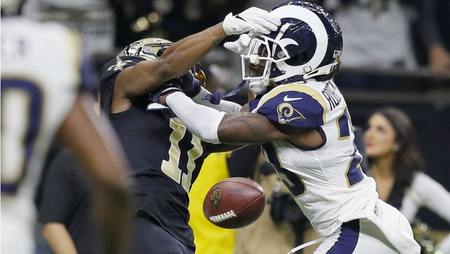 Yes, the officials at the NFC Championship game whiffed on what should have been pass interference on Los Angeles Rams cornerback Nickell Robey-Coleman after he rammed into New Orleans Saints wide receiver Tommylee Lewis.

But no, there is NO WAY Roger Goodell is going to step in and tell the Rams and Saints to go back to the Mercedes-Benz Superdome and play the game over from that egregiously missed penalty call.

Yet that's something the commissioner theoretically has the authority to do, and it's a rule fans started citing on Monday morning, partially thanks to Saints wide receiver Michael Thomas sending out this tweet:


"The Commissioner's powers under this Section 2 include the imposition of monetary fines and draft-choice forfeitures, suspension of persons involved in unfair acts, and, if appropriate, the reversal of a game's result or the rescheduling of a game, either from the beginning or from the point at which the extraordinary act occurred."

Again: Goodell can reverse a game right to the moment an "unfair act" occurred. Is your mind blown? ...