Could Taysom Hill Be the Heir to Drew Brees' Throne? (1 Viewer) 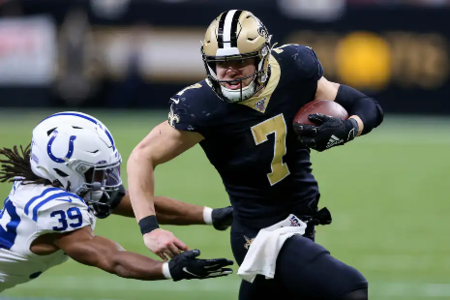 The dual-threat quarterback, signal-callers every bit as dangerous rushing as they are delivering passes from behind the line of scrimmage, has increasingly become the vanguard of the position over the last decade. Versatile dual-threat passers have indelibly dotted the history of the league, from the likes of Hall of Famers Fran Tarkenton and Steve Young, through to Donovan McNabb and Atlanta Falcons and Philadelphia Eagles QB Michael Vick. Never before the last ten years, however, has the NFL seen such heavy emphasis on deliberately identifying the athletic ‘do-all' QB and installing complementary systems around him.

Lamar Jackson, the electric second-year Baltimore Ravens' QB, the main man in a John Harbaugh and Greg Roman crafted offense, epitomizes the heights a single man can take a 53-man NFL roster. Taken with the final pick of the 1st round of the 2018 NFL Draft, Jackson has been nothing short of spectacular in just his sophomore campaign as a pro. The NFL MVP and first-time First-Team AP All-Pro selection, Jackson compiled 36 passing TDs against just 6 interceptions for 3,100+ yards at a 66% clip. Alone, these numbers are impressive, but taking into consideration his NFL QB record 1,206 rushing yards on 176 yards (6.9 Y/A) and 7 TDs, it’s easy to realize the tremendous value a player with his specific skill set brings to the Ravens.

If you’re reading this on SI’s Saints News Network, chances are you good that you are wondering what literally any of the above-named QBs has to do with the New Orleans Saints. After all, despite just recently turning 41, Drew Brees looks solid at worst and, well, every bit the imminent Hall of Famer he is at his best. Behind him is a prodigious young reserve in Teddy Bridgewater who, incidentally, is also a Louisville alumnus like Jackson. Of what relevance does a player like Lamar Jackson have in any meaningful way to the long-term outlook of the Saints franchise?