Cowboys' defense not downplaying Saints in absence of Drew Brees: 'Teddy Bridgewater is a hell of a player as well' (1 Viewer) 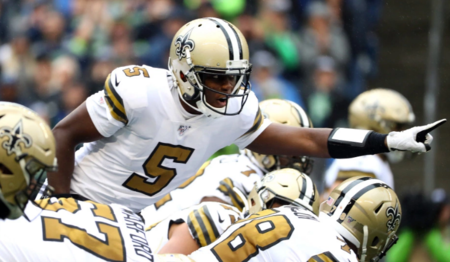 ARLINGTON, Texas — It was a victory for the Dallas Cowboys in their Week 3 outing against the Miami Dolphins, but they're not naive to how the game began simply because of how it ended. After dismantling their first two opponents in 2019 with a combined score of 66-28, they entered Sunday's contest as nearly 25-point favorites against the winless Dolphins, but sputtered to a 10-6 first-half lead that could've easily been a deficit going into halftime.

They shook off the cobwebs and racked up 21 points in the second half, including 14 points on their first two drives of the third quarter, but the message was sent and received that they are still responsible for keeping the same intensity at all times.

This is one reason you won't find them overlooking the New Orleans Saints in Week 4, in a game that was initially set to be a revenge match for the Saints that featured future Hall of Fame quarterback Drew Brees seeking to set the record straight after having been mauled by defensive end DeMarcus Lawrence and Co. at AT&T Stadium last season. Brees was hit four times, sacked twice, hurried twice and intercepted once en route to a season-worst 127-yard game that came attached to a passer rating of 71.6. ...