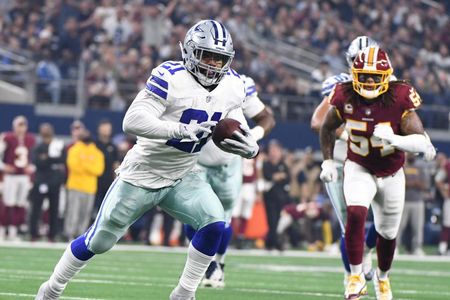 By The Sports Xchange | UPI

Quarterback Drew Brees and the New Orleans Saints' offense has been getting most of the attention during their 10-game winning streak, but the focus will be on the Saints' run defense when they face Dallas on Thursday night at AT&T Stadium.

The Cowboys have the league's leading rusher in Ezekiel Elliott, who has run for 1,074 yards while averaging 4.9 yards per carry.

He has gained at least 120 yards on the ground in each of Dallas' last three games. It is no coincidence that the Cowboys (6-5) won all three of those games to push them into a tie with Washington for first place in the NFC East.

New Orleans (10-1) might have the answer, because the Saints lead the NFL in rushing defense, allowing just 73.2 yards on the ground per game. New Orleans allows opposing runners to gain just 3.6 yards per carry, which is virtually tied with the Chicago Bears for the best in the league. ...