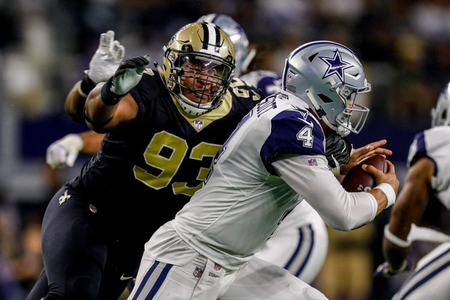 As soon as the play was over, New Orleans Saints defensive tackle David Onyemata was greeted by teammate Sheldon Rankins, who met him facemask-to-facemask while holding up three fingers.

Onyemata had just bulldozed Dallas left guard Xavier Su'a-Filo into quarterback Dak Prescott, causing Prescott to fumble and forcing the Cowboys to have to settle for a field goal at the end of the first half of Thursday's game in Arlington, Texas.

Rankins' three fingers represented Onyemata's three sacks — all in the first half — that were part of Thursday night's breakout performance for the third-year pro.

But if Onyemata could have things his way, he would trade the career night he had Thursday for a victory.

Instead, Onyemata will have to settle for the stellar stat line he posted in the Saints' 13-10 loss to the Dallas Cowboys. ...