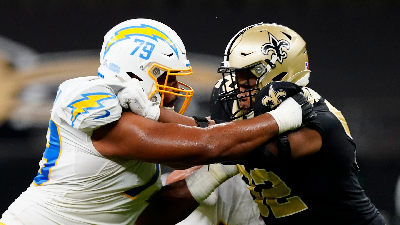 "Collapsing the pocket" isn't listed on the end-of-game stat sheet for defensive players, and neither is "occupying multiple blockers."

But even without that added metric, New Orleans Saints defensive end Marcus Davenport undoubtedly was impactful in his 2020 debut, a week ago against the Los Angeles Chargers in the Mercedes-Benz Superdome.

In the Saints' 30-27 overtime victory, Davenport played limited snaps after missing the first four games due to injuries to his elbow and toe. But in that small window, the third-year veteran posted a couple of quarterback hits and a pass defended, a snippet of the disruptiveness he caused when he was on the field for less than half the defensive snaps.

"Yeah, made some impact," Coach Sean Payton said. "He definitely had a handful of good rushes. Our plan was to play him right at that number count. It was his first game back. Those snaps will gradually increase.

"(Defensive end) Trey (Hendrickson's) playing well (with a team-leading 4.5 sacks while starting at right defensive end in Davenport's absence). We've got to just continue to grind on the pressure package, whether it's coming from a three-man rush or four-man rush or pressure."