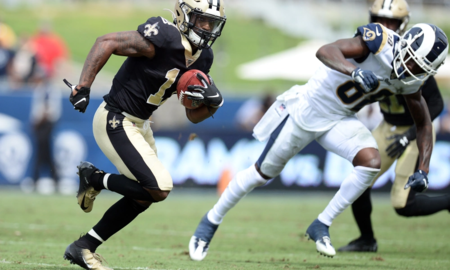 Deonte Harris is one of the brighter young stars of the New Orleans Saints, having made the leap from small-school Assumption College to the NFL, earning Pro Bowl and All-Pro recognition along the way. Harris shredded opponents on special teams while returning punts and kickoffs, finally plugging a position of need the Saints had spent nearly a decade fumbling with.

The second-year pro appeared on the Straight up Saints podcast to discuss his breakout 2019 season, as well as his ambitions for 2020 and beyond. One area of improvement Harris has focused on is his untapped potential as a pass-catcher, saying, “I want to be more involved in the offense and help us put more points on the board. I want to do what I did on special teams, but I also want to play a role on offense and help out as much as I can.”

And he feels fortunate to be surrounded by examples of success like Michael Thomas and now, Emmanuel Sanders. The Saints inked Sanders to a two-year contract early in free agency, and Harris is eager to see the NFL veteran in action once the team gathers for training camp.