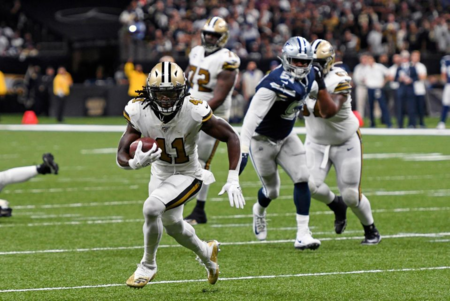 Saints kick returner Deonte Harris is coming off an All-Pro rookie season. He made the Pro Bowl and led the NFL in punt return yards as he established himself as one of the league’s most reliable returners.

But that doesn’t mean he’s a “finished product yet.”

“I say this all the time. I think people look at me like I am crazy, but I think Deonte can actually really improve a lot,” Saints special teams coordinator Darren Rizzi said. “I think people will just automatically look at the numbers, his accolades, the All-Pro and Pro Bowl and all that and automatically assume that this guy has got it figured out. I think Deonte would probably be the first guy to tell you that he has enough things to work on.”

Rizzi pointed to some bad decisions by Harris early in the season along with ball security as areas where he could improve.

“We know he has the ability, that is obviously a no-brainer,” Rizzi said. “He is very dangerous with the ball in his hand, but I think now (he's) refining his return game. ...

Similar threads
Despite a down year, Marshon Lattimore still a top 10 corner
Buccaneers plan a “voluntary” bubble during the regular season
discounting injury and illness, which player do you think holds the biggest key to a successful season
Fleur-de-Links, August 4: Saints release another player and a preview of Marshon Lattimore’s season
Odell Beckham says season should be cancelled.
NFL needs to create a bubble plan for 2020 season
Report: Saints to rent out part of the Loews Hotel to 'sequester' before the season
I hope we play this season since we have upgraded just about every position group
Walker: Drew Brees, driven by Super Bowl quest, faces toughest challenge yet in 20th NFL season
Saints Report: MLB could cancel season as early as Monday (Not looking good...)
Drew Brees sidesteps whether 2020 will be his last season
For asthmatic Saints TE Cole Wick, opting out of season is 'bigger than football'
NBA 2020 Season and Playoffs
N/S Cowboys have canceled all of 2020 Season Tickets
Optimism abounds for Pelicans as NBA season officially restarts
How Many Saints will end up opting out of the 2020 NFL season?
Fleur-de-Links, July 29: First Saints player to opt out of 2020 season and a preview of a 2020 Saints game
If the season is shortened or canceled due to covid
Day 1 of the weird season has arrived for the Saints. 'We're grinding through it'
Jason Vander Laan opts out of 2020 season
Former Saints guard Warford, two current backups opt out of 2020 season
Saints TE Jason Vander Laan opts out of 2020 season
Former Saints OL Larry Warford to sit out the 2020 NFL season: report
Source: Unsigned G Warford opts out of season
Source: Saints TE Cole Wick opts out of 2020 season due to asthma
Saints TE Cole Wick opting out of season {Merged and merged again}
Football season: chance of happening is approaching 0%
This NFL season rides on players’ abilities to “play by the rules”
N/S If we are using MLB as a test (Cluster of cases puts Marlins' season on hold)
Saints 2002 Season opener (Saints @ Bucs) ...this was a great game (start>>finish)
Podcast: The Saints Get the Greenlight to Start Training Camp: Which Players May Opt-Out of the Season?
Saints | Will fans be able to watch from Mercedes Benz Superdome stands this season?
NFL, NFLPA reach agreement on COVID-19 adjustments to CBA - Season is a Go
Saints officially cancel 4 preseason games; season ticket holders to receive refund or credit
NFL.com does ceiling and floor for every team. Saints ceiling: 15-1; floor: 10-6.
Why the New Orleans Saints could win it all, Part VIII: Cornerbacks
Saints LB Demario Davis, punter Thomas Morstead virtual press conferences
Former Saints coordinator Gregg Williams will be a head coach again
Saints Training Camp / Daily Updates 8-5-20
Saints promote Terry Fontenot to assistant G.M. of pro personnel
Saints promote Terry Fontenot to Vice President/Assistant GM of Pro Personnel
2020 NFL Team Preview Series: New Orleans Saints
Saints' Cam Jordan welcomes Tom Brady — 'the second-greatest QB of all time' — to NFC South
Saints won't benefit from NFL adding salary cap space due to COVID-19
Cameron Jordan talks trash to Tom Brady, but can the Saints back it up?
Why the New Orleans Saints could win it all, Part VII: Linebackers
Why the Saints are uniquely prepared for this offseason adversity
Saints cut defensive tackle Taylor Stallworth
Saints Training Camp / Daily Updates 8-4-20
Film Study: Nigel Bradham’s coverage skills provide Saints with solid depth
Share:
Facebook Twitter Reddit Pinterest Tumblr WhatsApp Email Link