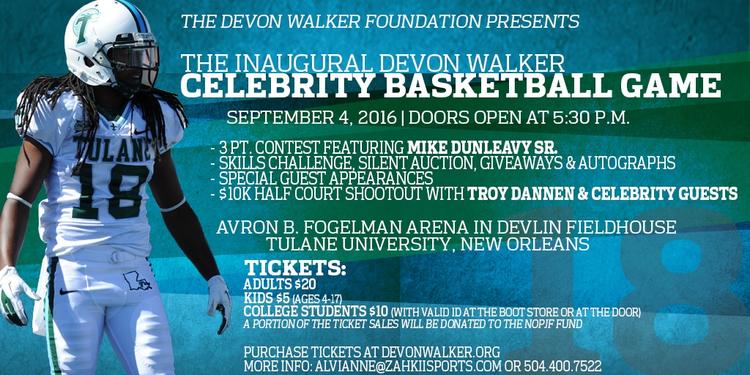 Former Saints' UDFA/signee from a couple years ago, Derrick Strozier, has asked me to post this here.

My name is Derrick Strozier. Many of you may not know who I am but I'm sure you know my good friend and former teammate Devon Walker. I've been working very closely with Devon and his mom as he's just created his very own non-profit (The Devon Walker Foundation). The mission of Devon's non-profit is to enhance the quality of life for individuals with spinal cord injuries through adaptive equipment, physical therapy, and advances in medical treatment. He aims to create global awareness and education towards the subject in efforts to prevent and cure the condition. In order to jumpstart the funds in his foundation, Devon has put together a Celebrity Basketball Game taking place at the Avron B. Fogelman Arena in Devlin Fieldhouse on Tulane University's campus. All proceeds from the game will benefit The Devon Walker Foundation and a portion of the ticket sales will be donated to the New Orleans Police and Justice Fund (NOPJF). The game will consist of Celebrities vs. NOPD/NOFD. In addition to the game, there will also be a 3 point shootout Tulane's very own Mike Dunleavy Sr., skills challenge, and half court shootout featuring Tulane Athletic Director Troy Dannen. Tulane Football's senior class will be in attendance signing autographs/taking pictures and head coach Willie Fritz will make an appearance as well.

The game will be taking place Sunday, Sept. 4th 2016.
Doors will open to the public at 5:30pm
There will be a reception before the game at 4pm taking place at Tulane's 1834 Club for players and sponsors of the game.

Besides the names mentioned on the flyer, New Orleans Saints players Brandin Cooks, Delvin Breaux, Brandon Coleman, and Chris Manhertz will also be in the building and participating in the event just to name a few. Robert Meachem and our very own Lester Ricard will also be participating in the event and are believed to be strong MVP candidates for the Celebrity team.

As you can see so far, the event is definitely shaping out to be a good one. In efforts to get the word out about the game, we've met with a few news stations and radio stations. WDSU and WWL want to do a story/interview on Devon to catch up with him on where he is now in life and for him to promote his event. iHeart Media wants to get his story out and promote the game as well. As of now, Devon and his mom have been spending money out of their own pockets to put this game together in hopes to generate $100,000 from the event and jumpstart the funds available for The Devon Walker Foundation. In order to cover the proposal iHeart Media sent for Devon to promote the game and to cover the uniforms that the participants of the game will be wearing, Devon and his mom will need $5,000 for those expenses. I am writing you guys in hopes that we can raise this money and take that burden off of their shoulders as his mom has been out of work for the past couple of years since Devon was injured in order to take care of him.

If you are able to contribute funds and donate to The Devon Walker Foundation, please send checks to:

You can simply visit devonwalker.org and donate from there.

We hope all of you are able to come out and attend the event in efforts to make it a success. We are also still accepting celebrities to play in the game in fill roster spots as well silent auction items. If you are anyone you know would like to contribute in either of these ways, please contact me by email at derrick.strozier@ml.com
Show hidden low quality content