Offline
Does any else love this show. I think it is brilliant. Whoever wrote and created this show actually pulled off making a serial killer very likeable and endearing. Dexter and The Office are my favorite shows.

Offline
Dexter competed with Heroes for my favorite new series last year. HBO needs to up their game to compete against SHO after Dexter and Weeds.

Offline
Dexter is by far my favorite show. The formula is nothing new; take a guy involved in unsavory activities and make him a sympathetic character; they just kicked up a notch from gangster to serial killer.

Offline
I love it!

Offline
when does it come on?

Offline
If you have Showtime on demand you can watch the whole first season and catch up for free.

Offline
Holy Cow. Is anyone still watching this show?

If Dexter doesn't sweep the Emmy's next year then there's no justice.

The suspense/drama the last couple of weeks have been off the freakin charts. The only series in recent memory that rivals the 1st 2 seasons of Dexter are the first few seasons of The Sopranos.

Muchos Kudos to Showtime and the writers.

i keep meaning to consider getting pay channels. i just never get around to it. i'll check your show out on DVD.

Online
Dexter is the best thing on TV right now, no doubt.

Offline
I've never heard of it. Is it a comedy? Drama? Dramedy? What show is it closest to? 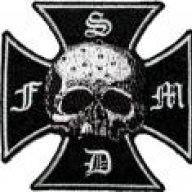 Offline
I'm about half way through season 1 on DVD and me and my wife love it.

Offline
Just added it to my Blockbuster Online queue.

Jonesy77 said:
I've never heard of it. Is it a comedy? Drama? Dramedy? What show is it closest to?
Click to expand...

It's a drama. I can't think of another show to compare it to. What other show features a serial killer as the protagonist? Basically it's a show about a forensic detective (blood spatter expert) in the Miami PD who moonlights as a serial killer.

He experienced a horrific family tragedy as a young child that instilled in him the craving for murder. He was adopted by a man who taught him the "Code of Harry" which basically is a method for satisfying his bloodlust without getting caught. Kill only those who deserve it and never leave a trace of evidence. As you can see, the show is dark....but not without wit and clever writing.

Season one deals with the PD's search for the Ice Truck Killer as well as developing Dexter's character through a series of flashbacks to his childhood detailing how he came to be and how Harry helped him. It was a tremendous debut to the show and not without some shocking twist/turns.

Season two has kicked it up a notch...or 10. Suffice to say, Dexter's in trouble....big, trouble and it ain't looking good. This time the murderer the PD is looking for is him.

Highly addictive show if you can stomach some of the material. The writing is top-notch.
Last edited: Nov 27, 2007

Offline
I just finished watching the first season of Dexter and wow, I'm so addicted. This show is amazing, nothing else compares to it or even comes close IMO. It's Always Sunny in Philadelphia is the only one in the ballpark.

Offline
Are season 2 episodes legally available online anywhere? iTunes? etc. I don't think I can wait for the DVDs after hearing what people have been saying about season 2.
Show hidden low quality content