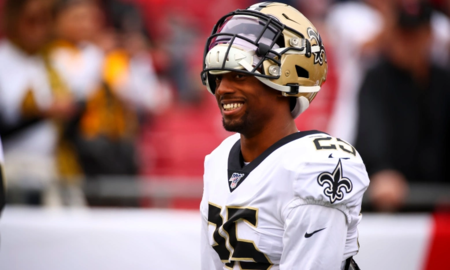 Whether they’re playing too sloppy or are simply victims of variance, the New Orleans Saints are committing too many penalties. It’s something they know they need to clean up, and it’s a point of emphasis for Saints coach Sean Payton and his staff.

Some Saints fans have been eager to single out cornerback Eli Apple, who leads the defensive backs with seven accepted penalties (three others were offset or declined by the offense) through New Orleans’ first twelve games. But doing that is a really ignorant move given context. He’s been a clean player for much of the season, but hit a slump with six fouls in his last three games, including three penalties last Thursday against the Atlanta Falcons.

Per charting from Pro Football Focus, Apple leads all Saints cornerbacks in both snaps played (802) and coverage snaps (560). Of course he’s going to draw more targets — and more opportunities to commit a mistake — by playing more often than his peers. Considering all 10 of the penalties he’s drawn (though just seven were accepted, remember), that’s a rate of just one foul every 80.2 snaps he plays. In other words, he’s being flagged for 1.2% of his total snaps.