Online
Sticky Post
Tony Pauline has become one of the better follows wrt NFL reporting. He’s done the draft most of his career, but he’s also been ahead of a lot of the recent labor stuff.

Anyway, here’s a link to his latest and a quick blurb on the Saints: 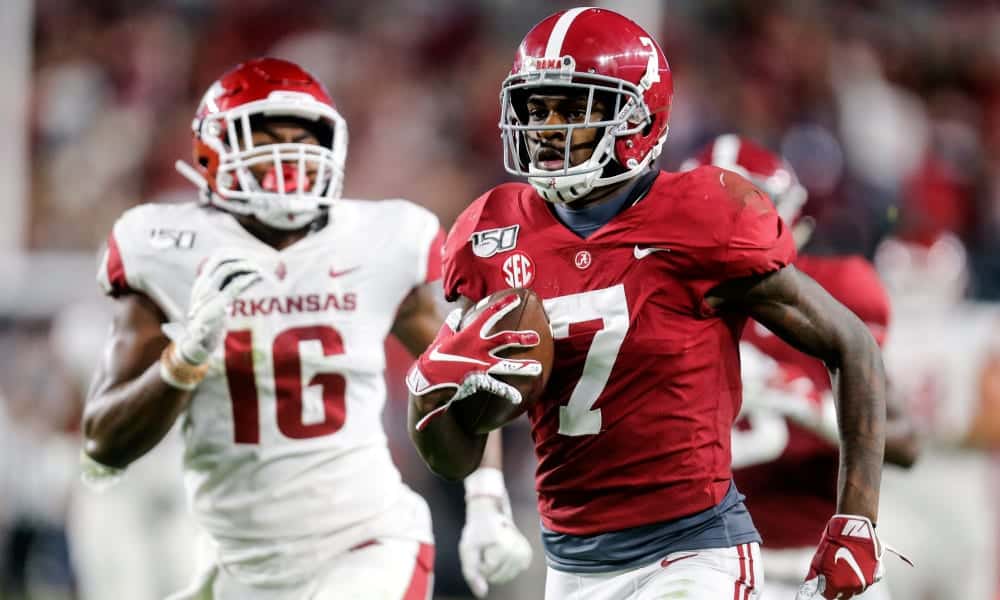 The 2020 NFL Scouting Combine has arrived and PFN has latest news and rumors from around the league with Tony Pauline & Ben Allbright in Indianapolis.

“Yesterday, I mentioned that numerous general managers expect 15 receivers to be selected during the initial two rounds of the draft. Some are saying as many as 25 receivers could be drafted by the time the third round closes out.
Word at the NFL Combine is that the New Orleans Saints could select at least two of those 25 receivers. With Drew Brees announcing he will be returning to the Saints in 2020 and the need to add depth at the receiver position around Michael Thomas, sources in Indianapolis tell me it’s very likely the Saints use both the 24th and 88th selections of the draft on a receiver.”
Click to expand...

TruSaint said:
man the more I watch Reagor the more I dislike him
Click to expand...

I’m tired of dudes who can’t break tackles. Got enough of that with Branson Cooks. Give me a dude that seems contact and wants to throw down any corner he happens not to be faster than.
Laviska Shenault fits the bill.

Offline
The concern is how long it takes for a rookie WR to be able to contribute enough. We haven’t been very successful with drafting WRs lately outside of MT.

reason2believe said:
The concern is how long it takes for a rookie WR to be able to contribute enough. We haven’t been very successful with drafting WRs lately outside of MT.
Click to expand...

or trying to poach off other teams practice squads. (Simmie Cobbs)

Have to devote some better quality resources at the position if you expect for the situation to improve; can't keep trying to find the diamonds in the rough with the bargain bin, and washed up veteran free agent signings, and bringing in Undrafted guys and hoping one sticks and learns the position. The most recent time you invested a 2nd round pick into the position it turned out to to be the best one in the NFL.

Rookie Wide Receivers are coming in more pro-ready than ever and breaking out sooner. See AJ Brown, Deebo Samuel, Terry McLaurin, and DK Metcalf from last year... and this years receiver class is grading out higher than last years with 15+ receivers grading out with 1st-3rd round type grades.

reason2believe said:
The concern is how long it takes for a rookie WR to be able to contribute enough. We haven’t been very successful with drafting WRs lately outside of MT.
Click to expand...

Not really true if you consider that they had AJ Brown as their top wr last year.

This was reported far before the draft.

They almost took him.

Online
I’d love to see Ruggs of the WRs mentioned. He’d be by far the best fit with Thomas IMO

I'm not accusing anyone of anything. Youre the only one that's doing that here, lol! Matter of fact, I've seen plenty of TCU games. Ross Blacklock is one of, if not, my favorite player in this entire draft. Dont know if i've seen more games than you, but who cares? The number of games youve seen really doesnt mean much, IF YOU DONT KNOW WHAT YOUR WATCHING. If youve in fact seen as many Horned Frog games as you claim, then you should know that in 2018, Reagor was TCU's entire passing game. He's never had great QB play, but at least the QBs from 18 were competent and accurate enough to get him the ball. This year, he had Max Duggan, a true freshman who was pretty much in way over his head. But you probably already know that, right?

As for Reagor, he did have an off year in 19, as did that entire O due to the aforementioned freshman QB. But in 18, you can clearly see Reagor competing and attacking the ball in the air. His route running is on point. His ability to separate is as good as anyone in this draft. Whether its on a flat out go or using his awesome RAC ability in the open field or on a reverse, Reagor is a true home run threat EVERYTIME the ball is in his hands. You can try to ding him his drops this year, but theyre of the concentration variety and bad ball placement by a sub par QB. Again, if youve actually seen as many TCU games as you say you have, i find it very odd that you view Reagor as simply a guy with "blazing speed". This dude is electric from the outside, the slot, out of the backfield, and on STs. These traits would be even more amplified w/a couch like Sean Payton scheming him open. Reagor has a pretty good set of skills at the position across the board. The bat out of hell speed aspect to Reagor's game is an added bonus.

Offline
I'd kinda rather see us take a stud WR in round one and then a Y-TE in round 3. But I have a feeling we'll nab either a QB or guard with one of those picks.

NOFALCONS10 said:
.
He might Possibly go as high as OBJ went at #12 when he has a strong combine.
Click to expand...

Talk to me after he blows up the combine today.

NOFALCONS10 said:
Talk to me after he blows up the combine today.
Click to expand...

Nothing anyone can do at the combine changes that...

MLU said:
Nothing anyone can do at the combine changes that...
Click to expand...

Offline
I have been plugging away at historical data for the top 10 WRs over the last decade. The overall trend I am seeing are bigger bodied guys and very few are small bodied receivers. There are a few, but they are the exception. I'll post the data in my thread about WRs physical attributes.

SuperKid said:
Rookie Wide Receivers are coming in more pro-ready than ever and breaking out sooner. See AJ Brown, Deebo Samuel, Terry McLaurin, and DK Metcalf from last year... and this years receiver class is grading out higher than last years with 15+ receivers grading out with 1st-3rd round type grades.
Click to expand...

This is such a good point and I think this helps the Saints. Modern WR prospects have caught more balls and run more routes than WR prospects we used to see. The proliferation of the spread offense all the way down to JR High combined with the rise of 7 on 7 camps has helped WRs and QBs contribute earlier in college and the NFL.

But there's one major issue, these WRs don't see suffocating press coverage like they'll see in the NFL. There are ways to hide a WR from press but it limits what they can do in the offense. So can the guy get off the LOS and can he handle our playbook, those are the two biggest questions I have for any WR the Saints draft.

Online
Saints' historical track record with LSU receivers is not deep, but it's pretty good.

Jefferson would be an absolute stud!

Offline
I think we trade up to get a 2nd rounder. Package our third with next years third to move up.

Optimistic Ozzy said:
I think we trade up to get a 2nd rounder. Package our third with next years third to move up.
Click to expand...

this, it’s the same every year, if someone we love falls we’ll trade up for him. If we stay at 24, it’ll be BPA, regardless of position
Show hidden low quality content