Offline
Sticky Post
What is everyone’s thoughts about the possibility that this is Drew’s last season? It’s July, it’s slow and if there’s another thread where this question is beaten to death please direct me.
But I’d love to hear anyone/everyone’s general feeling on 7-21-2019 about this being it for our QB or not
Click to expand... 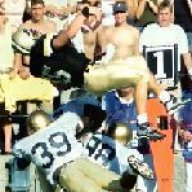 0rion said:
Double edged sword we're dealing with. When we win the Superbowl this year there's a 90% chance he retires on top.
Click to expand...

I think it much more likely, if he feels good and is still enjoying the game, that like John Elway decades ago, he'll keep coming back as long as the team keeps winning Superbowls.

I think this is especially true if Brady has not yet retired. Drew is highly competitive and I don't think he wants Tom to be ahead of him on any career passing records. Tom is a threat on passing TDs and total yards. Drew is about a year ahead on yards ( despite having played fewer years than Tom).

Offline
I don't think anything happens with a Brees contract until Thomas has a new contract. We need to see where that leaves us, and go from there.

Offline
It'll be a year by year deal. If he can still play at a high level then who knows. I don't think he'll announce it before the season and have a farewell tour. Drew doesn't want or need that attention and spotlight. He'll just hold a press conference and that'll be it. 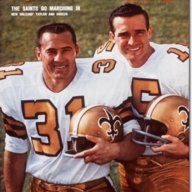 Offline
This may be his best shot at MVP since 2013. Would he go out on top? Nah,he wants to play and is having too much fun.

This is his last year only if he isn’t great. And I doubt that happens

Offline
This year or next will be his last (if we win the SB... then this year).... The FO has been "kicking the can" down the road on Brees' contract for a while now... they can only do that so long before they have to pay (or lose) their young core of Pro-bowl talent... Namely - Thomas, Kamara, Lattimore, Ram, Williams, etc. Sooner rather than later these guys will want to get paid, and it won't matter if they have a year left on their contract or that we need to pay Brees for not being here.

That's the double edge sword to having a great draft or 2 in a row... all the bills come due around the same time.... and you can't pay them all.
Show hidden low quality content