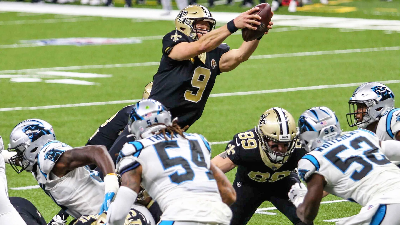 Big-time players made a few big-time plays in some of the biggest moments Sunday for the New Orleans Saints.

That's a good way to describe how the Saints (4-2) managed to pull out their 27-24 victory over Carolina (3-4) in the Mercedes-Benz Superdome, New Orleans' third straight victory of the season.

A couple of noteworthy individuals helped pave the way.

OFFENSE: Drew Brees was really, really good against the Panthers. Did I say really good? I meant, REALLY good. Brees completed 29 of 36 passes for 287 yards and two touchdowns, and he ran – actually, dived – for New Orleans' third touchdown. The Saints converted 12 of 14 third-down attempts; on third down, Brees completed all nine pass attempts for 110 yards and seven first downs. And his 1-yard touchdown run came on third down, too. The Saints needed Brees to be as accurate as he was Sunday, especially playing without receivers Michael Thomas and Emmanuel Sanders. In fact, rookie free agent receiver Marquez Callaway (eight catches for a team-leading 75 yards) could have been a pick here, as well as running back Alvin Kamara (148 yards from scrimmage on 22 touches). And the offensive line should like a lot of what it sees on film, too. But Brees was brilliant.