Drew Brees has been NFL’s MVP this season, and this is the year he wins the award (1 Viewer) 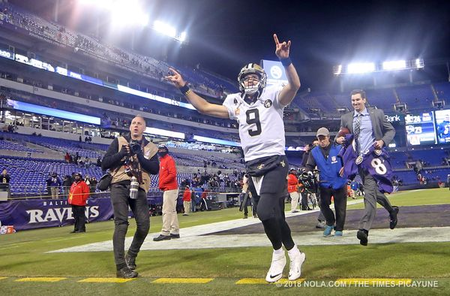 At age 39 and in his 18th campaign, Drew Brees is playing the best football of his remarkable career.

He is the Benjamin Button of NFL quarterbacks. While confounding opposing defenses, he is defying the laws of nature, somehow improving with age as he approaches his 40th birthday in January.

“I was watching tape today,” Minnesota Vikings coach Mike Zimmer said this week as his team prepared to face Brees and the Saints on Sunday night in Minneapolis, “and thought, ‘How old is this guy? I thought he was getting old.”

Brees has shown few if any signs of decline in his game this season. As the catalyst behind the Saints’ best start in five years at 5-1, he leads the NFL in passing efficiency (121.3) and completion percentage (77.3) and is the only starting quarterback to have not yet thrown an interception. ...