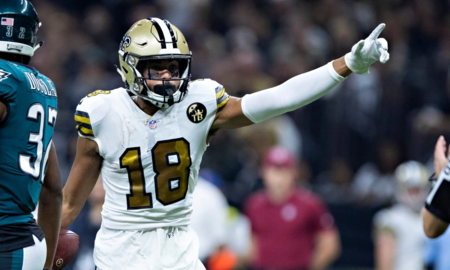 The New Orleans Saints are without their top playmaker on offense as wide receiver Michael Thomas holds out from training camp practice, angling to reach a contract extension after earning first-team All-Pro recognition last year.

In the meantime, quarterback Drew Brees has identified his go-to target in with Thomas out of the picture: second-year pro Keith Kirkwood. Kirkwood signed with the Saints as an undrafted rookie out of Temple in 2018, who initially spent time on the practice squad before getting promoted. Including the playoffs, he caught 15 of 23 passes sent his way last season for 217 yards, three of them finding the end zone. That’s a small sample size, but it did enough for him to build Brees’ confidence in their connection.

ow, Kirkwood is running with the first team offense alongside veteran wideout Ted Ginn Jr. And he’s lining up as the X-receiver, a spot normally reserved for Thomas. No one will confuse the two of them, but the 6-foot-3, 210-pound Kirkwood has made for a serviceable replacement through the first two days of practice. ...