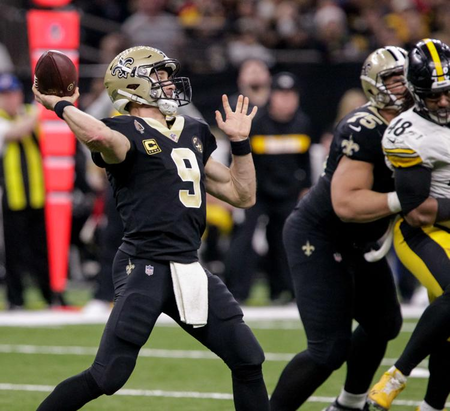 Last week, Drew Brees was once again named to the list of 10 Best Mannered People by the National League of Junior Cotillions.

That distinction means Brees probably will never say what he really wants to say about being on that other list he just can't seem to get off of: best NFL player to never win a Most Valuable Player Award.

But it appears Brees will stay on that list, right alongside guys like Jerry Rice and Eric Dickerson.

Based on the voting for The Associated Press' All-Pro team, which was released Friday, it seems Kansas City Chiefs quarterback Patrick Mahomes is the favorite to become the league's MVP.

Mahomes received 45 of the 50 first-team votes at quarterback on the All-Pro team. Those same voters choose the MVP.

Assuming those voters vote the same way, it would mean another year in Brees' brilliant 18-year career that he won't get to add to his résumé a bullet point that reads "MVP." ...