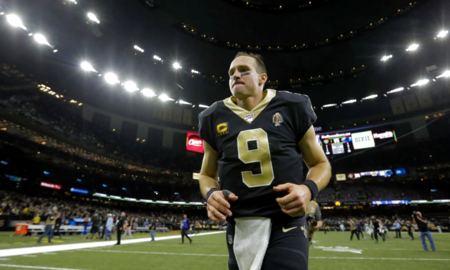 New Orleans Saints quarterback Drew Brees appeared on The Rich Eisen Show along with other guests including “Modern Family” actor Eric Stonestreet, a well-known Kansas City Chiefs fan. Brees talked about his career so far, his family’s experience at the Pro Bowl, and his plans for watching Super Bowl LIV, which will pit the Chiefs against Brees’ NFC-rival San Francisco 49ers. And of course everyone wanted to know who Brees was pulling for.

“No no no, listen,” Brees replied when told it would be alright if he was pulling for the 49ers. “I would love to see Andy Reid get a Super Bowl ring. He deserves it. Absolutely. Plus I can say that the last Super Bowl that the Kansas City Chiefs won was coached by Hank Stram, Purdue grad. Quarterbacked by Len Dawson, quarterback grad. So, blow your mind,” he joked, referencing the Chiefs’ Super Bowl IV win over the Minnesota Vikings. ...