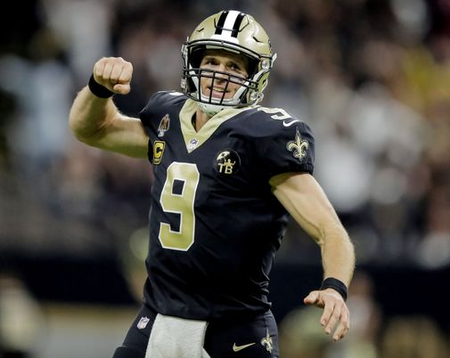 NEW ORLEANS (AP) — Drew Brees threw four touchdown passes to inexperienced receivers and the New Orleans Saints won their 10th straight game Thursday night with a 31-17 victory over Atlanta that eliminated the Falcons from contention in the NFC South.

Tommylee Lewis and Austin Carr each caught their second career touchdown pass, and rookie tight end Dan Arnold grabbed his first, as did rookie receiver Keith Kirkwood. All four entered the NFL as undrafted free agents within the past three years and had combined for zero touchdowns this season before Carr caught the first of his career last Sunday.

Meanwhile, the Falcons (4-7) lost three fumbles inside the Saints 20 — something no team facing streaking New Orleans (10-1) can afford this season.

Atlanta quarterback Matt Ryan was stripped by safety Marcus Williams on a third-and-2 from the Saints 3 and Williams recovered to end Atlanta's opening drive. Julio Jones was stripped by linebacker Alex Anzalone after a catch on the New Orleans 17, and safety Vonn Bell recovered in the final minute of the second quarter to preserve a 17-3 lead going into halftime....