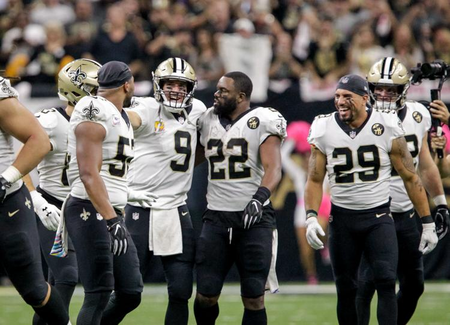 Drew Brees saw it before the rest of the Superdome, reached back and let fly, and as the ball spun through the air, the crowd saw it too, saw Tre'Quan Smith running all alone down the right sideline and started to buzz even louder in realization that history was about to be made Monday night.

A 62-yard touchdown pass to become the NFL's all-time passing leader in what became a 43-19 rout of the Washington Redskins.

Brees initially reacted the way he always does, hugging Terron Armstead first and then the rest of his offensive linemen before the Saints sideline let anybody who might have missed the significance of the moment know this was different, running out to midfield en masse to celebrate with the man who has led them for 13 years.

Always aware of the game situation, Brees headed upfield to the huddle, holding up two fingers to the sideline to ask if the Saints were going for the two-point conversion, only to be intercepted by a referee who let him know it would be a little while before the game resumed. ...