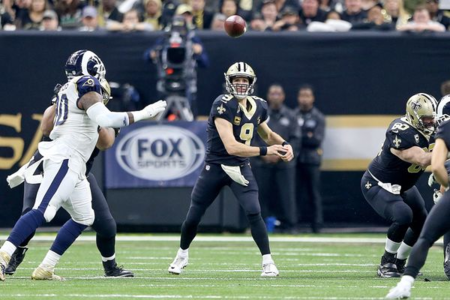 Drew Brees said he would have rather not been appearing on national broadcasts to answer the same questions over and over again, but he was doing so out of his responsibility as the New Orleans Saints quarterback.

Making the rounds on both the “Today Show” and the “Dan Patrick Show” on Friday (Feb. 1) morning from Atlanta, Brees said he wished NFL commissioner Roger Goodell would have felt the same feeling of responsibility when addressing the non-call at the end of the NFC Championship Game that potentially cost the Saints a spot in the Super Bowl. He was critical of Goodell both in the delay and in the quality of his message.

“Do I really want to be in a position talking about this over and over again? No, but I have to stand up and do it because I have to represent my team, represent the Who Dat Nation, and that’s my responsibility,” Brees said on the “Dan Patrick Show.” “It’s the commissioner’s responsibility to do the same thing, and yet we don’t hear a peep for 10 days, and it’s because he has to do it now because he’s at the Super Bowl and he does his annual press conference.” ...