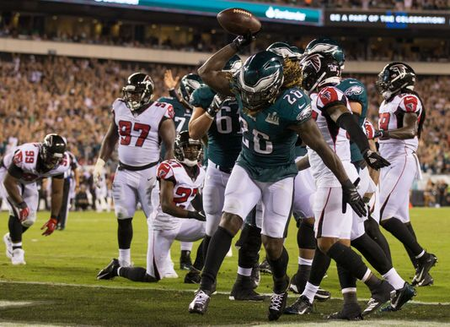 PHILADELPHIA — Thursday night began with a "special Philly" kind of moment as the Eagles unfurled the first Super Bowl banner in franchise history.

Later, the "Philly Special" returned to help catapult Philadelphia past the Atlanta Falcons 18-12 in the NFL's 2018 regular-season opener.

Jay Ajayi scored two touchdowns, the second an 11-yard dash with 2:19 left in the game that put the Eagles ahead for good on a night when neither of the NFC's past two champs looked particularly Lombardi-worthy in a sloppy game marred by penalties and uninspired offense.

But Philadelphia did revert to some of its 2017 magic to get the victory.