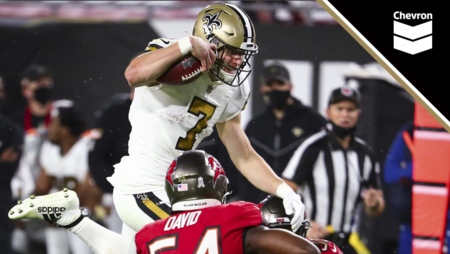 'I've always believed in myself'

Absolutely, Taysom Hill envisioned success for his first NFL start at quarterback because, well, why wouldn't he?

Since the New Orleans Saints claimed him off waivers in 2017, Hill has been effective in every role played for the Saints. None of them had been as an all-game quarterback, but that's the position that New Orleans envisioned for Hill, Coach Sean Payton has said.

So Hill simply went about the business of doing what he expected against Atlanta, and completed 18 of 23 passes for 233 yards, and ran 10 times for 51 yards and two touchdowns, in a 24-9 victory that gave the Saints (8-2) their seventh consecutive win.

"I wouldn't say that I was able to do something that I didn't know I was capable of," said Hill, who made his first start in place of the injured Drew Brees, and will make his second start Sunday when the Saints play the Broncos (4-6) at Empower Field at Mile High in Denver.

"I've always felt like I was capable of being a starter in this league and really, it just came down to having the opportunity," he said. "So I wasn't surprised from that standpoint. I've always believed in myself." ...