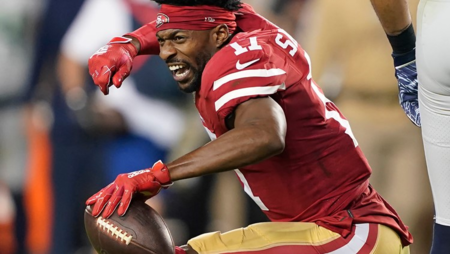 NEW ORLEANS — The Saints waited to make their biggest splash of free agency on day three of the new league year, when they signed one of the most sought after free agent wide receivers of the spring, Emmanuel Sanders, to a two-year, $16 million deal.

"I just want to say how excited about joining the New Orleans Saints. I’ve been a fan of Sean Payton and Drew Brees for a very long time. I’ve seen them do it at a high level for a very long time and I’m excited to join (the team)", Sanders said. "Obviously, being a receiver in this offense is something special. It reminds me of 2014 when I linked up with Peyton (Manning) and we were passing the ball, slinging the ball and it was a pass happy offense. I’m excited to get back into a system like this. Hopefully do what I did in 2014 when I had one of my best years.”

During that 2014 season, Sanders' hauled in 101 receptions for 1,404 receiving yards and nine touchdowns, all delivered by the right arm of Peyton Manning. And for the two years that Sanders played with Manning, he was an extremely effective No. 2 punch to Manning's No. 1 wide receiver, Demaryius Thomas. Which is a perfect fit, because the role he needs to play is a great compliment to the Saints' current No. 1 wide receiver, Michael Thomas.