...Through the first four games, the undefeated Saints, who have a bye this weekend, haven't missed many opportunities.

New Orleans leads the league with 13 takeaways (10 interceptions and three fumble recoveries) and is plus-7 in takeaway/turnover differential, tied for best in the NFL. The Saints have scored three touchdowns on takeaways, including two interception returns of 90-plus yards each for touchdowns by the opportunistic Sharper. New Orleans has won or tied the takeaway/turnover differential in all four of its games.

Sharper, 33, already has a league-best five interceptions, after getting just one in 16 games with Minnesota last year. The Saints didn't register their 10th interception in 2008 until the 11th game of the season.

New Orleans' three defensive touchdowns -- the two interception returns by Sharper and a recovery in the end zone by nose tackle Remi Ayodele last week -- are as many as the Saints scored in their previous 25 games. Twenty-third in the league in total defense in 2008, New Orleans is ninth through four games this year.

It all marks quite a turnaround for the previously non-resourceful Saints, but one that Williams, arguably the franchise's premier offseason acquisition, has come to expect from his defenses...
Click to expand...

Doesn't look like the Saints D can stay under the radar anymore... 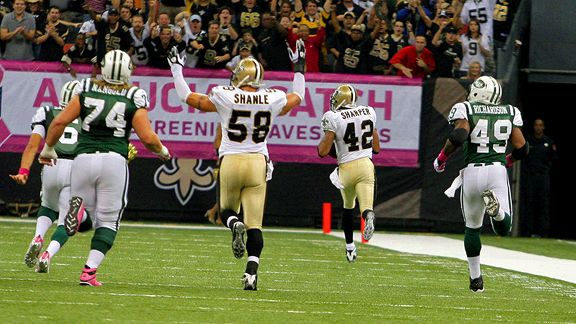 Offline
I wish Len hadn't had his heart problems, otherwise he might be doing the NFC South blog now. Ever since his daughter was at Tulane he's been a good follower of the Saints (not too biased toward us, but favorable to us).

Offline
It's going to be more takeaways once Sharper owns Eli... again

Offline
He was wrong counting Ayodelle as a lineup change. Clancy starts over him when healthy.
Show hidden low quality content

Saints open as a 5.5 point road favorite against Seattle
2 3