Fagg carried out on a strecher... (1 Viewer)

This kind of thing is not common but I can see why the elite prospects dont do the combine sometimes...

That is roughly how much in signing bonus money Fagg would have earned if he was a seventh-round pick in April's NFL draft, as forecast by at least two scouting services (NFLdraftscout.com and the Drugstore List).
Fagg almost certainly won't be chosen now that he suffered what is believed to be a serious knee injury Sunday at the NFL combine in Indianapolis. 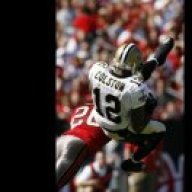 Offline
That is just sad!!

Offline
Hopefully he got or is close to getting his degree.

He should still make someone's team. He's a faster and slightly shorter Colston, but he has big ups and a mean streak.

Offline
Wow, blew out a knee at the combine? What incredibly bad luck. With more and more players opting not to run or particpate in the combine you can only imagine what effect this will have......

Google his name (Chase Lymon) if you're a new-bie Saints fan.

Ti Rider said:
Wow, blew out a knee at the combine? What incredibly bad luck. With more and more players opting not to run or particpate in the combine you can only imagine what effect this will have......
Click to expand...

But won't most of these guys still have to run and participate at their pro day? No way the NFL teams are drafting 2-7th round players based on tape alone. The scouts still need to know the player is in shape enough to be signed. Right?

hammernnails said:
I remember him in a few games... I would have figured him to be drafted higher but what do I know??
Click to expand...

Yeh I thought he would be a 5th rounder

Google his name (Chase Lymon) if you're a new-bie Saints fan.

Lyman looked like he was going to be a beast (stats, height/speed, etc), but man oh man was he injury prone or what? and just in general had BAD luck!

Yall's remember when Lyman blew out his knee, on the 1st day of rookie camp?

Sad and a BIG time reach.

Google his name (Chase Lymon) if you're a new-bie Saints fan.
Click to expand...

Offline
If his agent is worth his salt, he had a large insurance policy. Still bad news though.
Show hidden low quality content