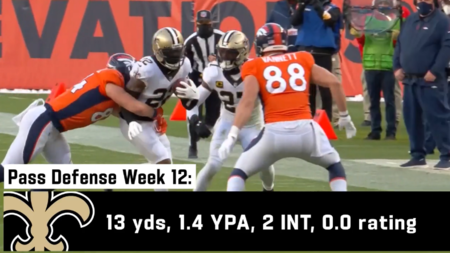 By Kevin Patra | Around the NFL Writer

Squelching the Falcons has come amid the Saints defense ascending to the top of the league in most counting stats.

"Everyone that's playing these guys is struggling. Look at the Saints' numbers; they're fantastic," Atlanta offensive coordinator Dirk Koetter said, via the Associated Press. "I've never seen a defense ranked in the top 10 in so many categories. They're playing with a lot of confidence."

The Saints rank No. 1 in total yards allowed, fewest big plays allowed, No. 2 in yards per played allowed and rushing yards allowed, tied for fourth in turnovers forced per game, and fifth in passing yards and scoring. ...