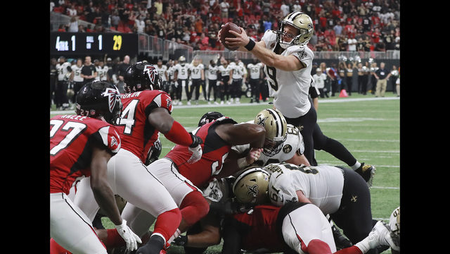 FLOWERY BRANCH, Ga. - New Orleans quarterback Drew Brees is torching any defense that jumps in front of him.

The Falcons (4-6) are set to face Brees and the streaking Saints (9-1) Thursday at the Mercedes-Benz Superdome.

Brees and the Saints lead the NFL in scoring a 37.8 points per game and have scored at least 40 points in six of 10 games this season. After losing their season opener, they’ve ripped off nine consecutive victories.

“He’s the maestro, and the maestro does a great job of performing under pressure,” Falcons defensive coordinator Marquand Manuel said.

In the teams’ previous meeting, the Saints prevailed over the Falcons 43-37 in overtime Sept. 23. The Saints amassed 534 yards and were playing without power running back Mark Ingram. He’s since been reinstated from his suspension, and the Saints’ offense has continued to roll. ...