Falcons Safety: "...it makes it hard to play them with so much speed out there on the field." (1 Viewer)

FLOWERY BRANCH, Ga. -- With quarterback Drew Brees at the top of his game and offensive-minded head coach Sean Payton spinning his wizardry, the New Orleans Saints have scored 40 points or more this season against some of the better defenses in the NFL.

Enter the Falcons with their bend-but-don’t-break defense -- ranking eighth in the NFL in scoring but 25th in yards per game -- which broke in last Sunday’s 37-21 loss to the Cowboys.

In Monday night’s significance-laden NFC South tilt at the Superdome, the Falcons (4-2) will have to hold their own against the 6-0 Saints and all of their weapons, which have helped to produce the NFL’s third-ranked running offense and sixth-ranked passing offense for the top overall spot.

A Falcons’ secondary that took a battering against Tony Romo in surrendering 299 passing yards will have to rebound. Falcons safety Erik Coleman said that while the Saints’ offense is complex, it’s the execution of defending it that is most nettlesome.

"I don’t know if it’s hard to make the right calls, it makes it hard to play them with so much speed out there on the field," Coleman said. "They have great match-ups everywhere on the field and they do a great job of getting the ball to their playmakers." ...
Click to expand...

Offline
This is a BIG game. Going up 3 games is huge.

But after Thursday&#8217;s practice, three of the Falcons&#8217; four starting defensive lineman did not practice at all (Thomas Johnson) or were limited in their participation (John Abraham and Jonathan Babineaux).
Click to expand...


We need to wear them out & demoralize then.​

Offline
There is going to be a landslide of points from our offense. Which will then lend itself to the Falcons feeling the need to keep up and sling the ball over and over again.

Enter Darren Sharper who will have 3 INTs, 2 of which will be returned for TDs. This game will be over early.

Offline
On Thursday the had Falcon LB M. Peterson on Sirius. He said that the Falcons needed to concentrate on stopping the run and get Brees into 3rd and long situations.

PLEASE, I hope they actually try to do this. Drew will eat them alive with playaction tosses to Shockey and Colston.

Merl said:
On Thursday the had Falcon LB M. Peterson on Sirius. He said that the Falcons needed to concentrate on stopping the run and get Brees into 3rd and long situations.

PLEASE, I hope they actually try to do this. Drew will eat them alive with playaction tosses to Shockey and Colston.
Click to expand...

Hmm, I for one don't care to see any 3rd and longs. Yes we have good matchups but 3rd and long takes away quite a few of those and puts too much pressure on the Offense. Be careful what you wish for.

We need to wear them out & demoralize then.​
Click to expand...

Dude, thats unpossible, they are Falcons. They already have no morals.

/afore I get corrected, yeah I know thats not what demoralise means. It just cracked me up to say that Falcons have no morals.

Offline
Win by 1 or 20... Getting up 3 games would be great.... Cannot overlook them though , they are 4-2 and lost to a rested Cowboys team and the patriots... 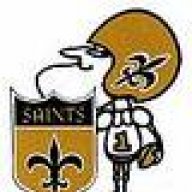 Offline
I'm looking for Drew to perform surgery on this porous Falcons defense. As a previous poster said, this will make them one dimensional, at which point, we introduce Matt Ryan to Mr. Sharper.

Offline
good read man thanks for posting, the falcons definetly know how important this game is to their season, this game wont be a push over...till about halfway through the first quarter when we unleash dolphinisk vs saints 1st quarter hell.
Show hidden low quality content