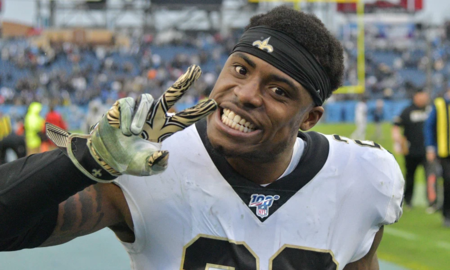 There must be some sort of agreement between the teams in the NFC South that one team must wear a terrible numbers font on their jerseys at all times. The Tampa Bay Buccaneers ushered in the Tom Brady era with a flourish by ditching their maligned, digital alarm clock-styled uniforms, opting instead for the most generic red-on-white jerseys you could imagine.

Not to be outdone, the Atlanta Falcons introduced their own new uniforms: and boy, are they ugly. Featuring an ill-advised color gradient from red to black — looking more like an old Texas Tech alternate than an NFL kit — the jerseys are offset by a two-tone font for the numbers that tries to create a three-dimensional illusion. Instead, it looks like nothing so much as a child’s unfinished coloring book.

Funnily enough, the Falcons’ new black-on-black look is a near-match for the uniform worn by Adam Sandler in his 2005 film “The Longest Yard,” which the Carolina Panthers official Twitter account was helpful enough to highlight: