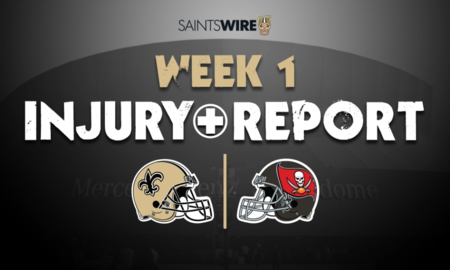 The final injury report of Week 1 was released on Friday, with the New Orleans Saints and Tampa Bay Buccaneers sharing updates on several players managing ailments.

New Orleans will be without both of its most recent first round draft picks: rookie guard/center Cesar Ruiz (ankle) and defensive end Marcus Davenport (elbow) were both ruled out for Week 1. Ruiz hasn’t practiced in two weeks after going down in the middle of a pile, and Davenport has also seen an extended absence. Defensive back P.J. Williams (hamstring), listed as a safety, is questionable to play after first appearing on Thursday’s injury report.