Offline
Sticky Post
If anyone wants to upload video clips you're more than welcome to.

This is at the Goal line. You can see Presnap here that the Saints are in Cover 7, which is a low red zone coverage where you are (essentially) dividing the field
into 7 horizontal zones. You can see the CBs playing outside leverage catch technique (soft press) meaning they are fade responsible. The overhangs (PJ Williams at the bottom of the screen) are catch technique on #2 (slot) and slant responsible on #1 if #2 releases inside or outside. 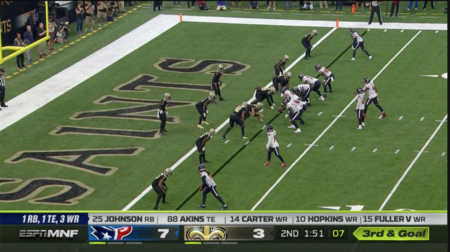 This is right after the snap, and the both of the WR's at the bottom are running slants. They stem vertical first to establish timing and to drive the defender over them back on his heels. One thing I did not see in real time is that the slot DOES do a good job of running up PJ Williams toes before breaking in on his slant. 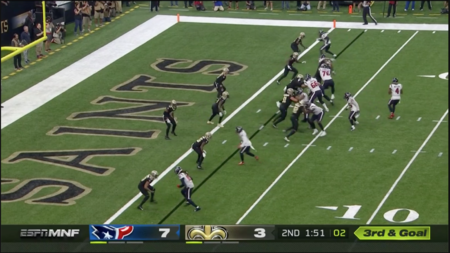 The #2 WR at the bottom breaks in on his slant. PJ can pass him off as he has a high/low bracket by the LB and the S. Seeing slant by #2, his job now should be to sink and locate #1. The most dangerous route he needs to defend is the slant by #1. Remember, Cover 7 is an effective coverage in the low red zone because WRs can only run so many routes (condensed space). 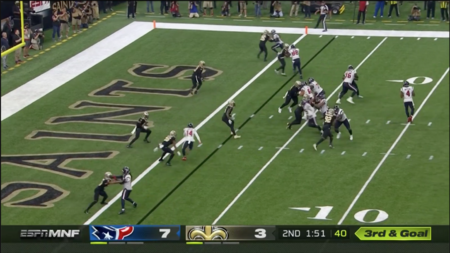 Three things happen here: 2 good by the Texans and 1 bad by PJ Williams. 1) Hopkins sets his slant 'high' or 'skinny'... he runs his route to space rather than to coverage (skinny angle rather than a flat angle out of his break). 2) Watson is patient and doesn't force the throw to the slant out of the break... he hits it in the 2nd window. 3) PJ Williams floats shallow. I will dial back some of my earlier criticism because this was really a bang-bang play, so easier said than done, but he has to get depth and use his eyes to locate #1 rather than staring down the QB. He stays stationary, and needs to know that if the QB is a) looking in his direction (right at him in this case) and b) not throwing the ball, he is waiting for the route to clear. Lattimore almost certainly communicated the slant, so he needs to either locate 1 with his eyes or be savvy enough to continue gaining depth and maintaining position in that slant window. 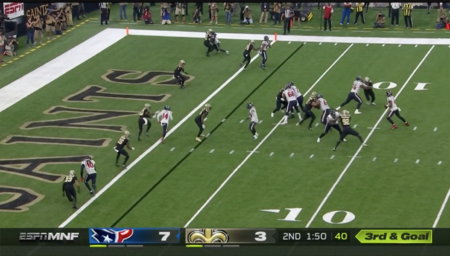 The next frame would be Hopkins catching the TD about 8 yards deep in the end zone. Williams stays shallow despite having no underneath threat. He also knows that the #1 WR to his side is Hopkins, so again, while there are some fundamental breakdowns that happen because the NFL is a VERY FAST game... He needs to exhibit a little more situational awareness here.
Click to expand...

TCUDan said:
I wasn't even going to share these shots from this gem of a play by PJ Williams (TD play on the 2 play drive by the Texans to take the lead).

He should be staying in his backpedal longer (as long as he can) using a weave technique, not flipping his hips open when he still has 5 yards of cushion. The WR stems him outside, gets him to flip his hips early, then rocker steps back in on the seam route. 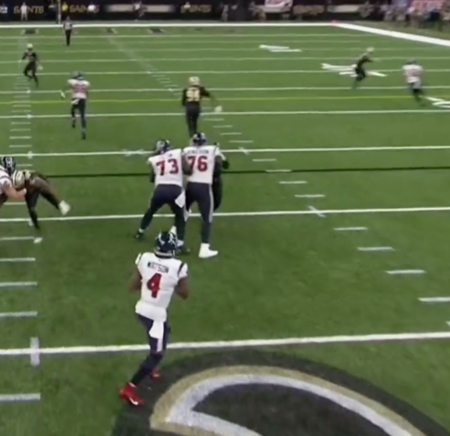 Quality isn't great, but you can see PJ coming out of a speed turn to try and recover on the seam. The problem is when you get stemmed out of position like that, all the WR has to do is flatten out his route and you don't have the angle. I will also say that I don't know why the hell Marcus Williams is jumping on the underneath route rather than staying deep middle... but this is an example of the little technical bad habits PJ Williams have that seem to flare up like herpes in critical situations. 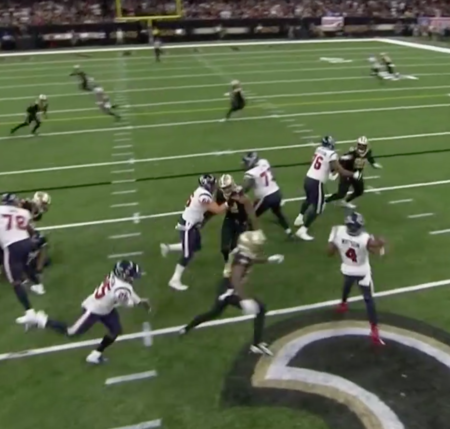 This one kills me because it was a great play call.
If given 1 more second, Bell would have gotten home and potentially caused a fumble which would have ended the game.
Show hidden low quality content