Yeah, Vernon Gholston could likely be the DROY. He reminds me of Demarcus Ware, only with bigger arms.

A surprise, but I'm predicting Adibi will lead his team in tackles and make a really big impact (I figure him as a 2nd rounder and probably low enough to go to a good team despite his ability - he just seems to be flying under the radar right now).
He will edge out Dorsey and Ellis. Just my opinion, but I think OLBs have a quicker learning curve than interior defensive linemen. It just seems DTs take a year to become dominating players in the NFL. I can hardly think of any DT who was able to do so their first season. On the other hand, I've seen several LBers make a significant impact as rookies.

hester a FB TE hybrid becomes the new prototype guy. a slot reciever who can block out the backfield did i mention catch. oh yea he can run as well.

he is the steal of the draft you heard it here first.

Offline
A LB and a RB

Offline
Defensive: Saints 1st round pick(he will definitely stand out on our D)
Offensive: Jake Long 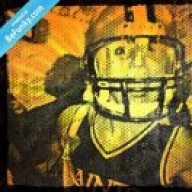