For Saints, another blocked punt vs. Falcons -- even if New Orleans wasn't trying for it (1 Viewer) 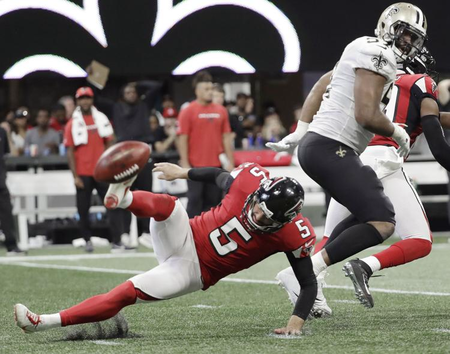 ATLANTA — A Falcons punter is never safe in a game against the New Orleans Saints.

Steve Gleason's iconic blocked punt against Atlanta in the Saints' first game back after Hurricane Katrina is memorialized in a statue outside the Superdome. Michael Mauti, the son of a Saints special-teamer and a local product, earned his place in New Orleans lore by blocking a punt for a touchdown in 2015.

When Alex Okafor crashed through the line and blocked Matt Bosher's punt in a tight game in Atlanta Sunday, the Saints should have known good things were to come in a 43-37 overtime win over their hated rivals.

"I guess I didn't think about it at the time, but now that you mention it, good things happen after that," Saints quarterback Drew Brees said.

Okafor's blocked punt was a little different than Gleason's or Mauti's. For starters, it wasn't returned for a touchdown, although Craig Robertson's 12-yard return set up a touchdown pass from Brees to Cameron Meredith that gave the Saints a 23-21 lead midway through the third quarter. ...