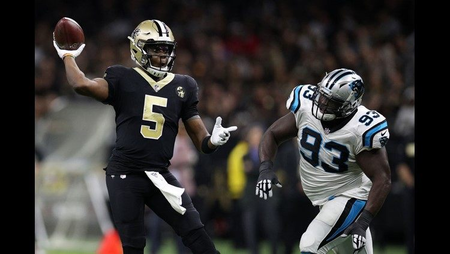 NEW ORLEANS — Sunday’s New Orleans Saints 33-14 loss to the Carolina Panthers is a friendly reminder exhibition football is as awful in December as it is in August.

The Saints showed less interest in winning Sunday than my 3-year-old does using the potty. If you didn’t know 3-year-old boys, let me tell you, using a bathroom holds little interest to them.

The Saints didn’t need to bother doing anything other than avoid serious injury Sunday and they did so, with a little scare thrown in.

The only drama Sunday was injury concerns for Sheldon Rankins, Alex Okafor, and Andrus Peat. The good news is only Peat’s hand injury looked like a serious issue. I won’t lie, when I saw Rankins being attended to early in first quarter, I wanted Sean Payton to throw the flag. Not the challenge flag, the white one. Forfeiting to avoid injury seemed like a sensible move at that very moment.

I did feel bad for Teddy Bridgwater. Teddy was running for his life most of the day as the Saints started 3 backups along the offensive line, including one guy signed this week. I’m surprised the Saints didn’t have a drawing before the game and give a lucky fan the in-game experience of a lifetime starting at offensive tackle. ...