Offline
With the firsts days of free agency approaching I took a look at the list of possibilities and came up with a few realistic prospects that the Saints could and should try to sign immediately:

1. WR Bryant Johnson - Big receiver with deceptive speed that has basically been in the shadows of two studs out in 'Zona. Good hands, big body and would not command crazy $$$. He could come in and fill the #2 spot, which would allow Patten(if re-signed) and Meachem to work the slots. Devery will not be re-signed, and Moore is under contract. I think the offensive system Payton employs would be very attractive to a guy looking to prove his worth.

2. WR Bernard Berrian - Ditto for him. Not a big body like Johnson but is rangy with great hands and top speed. I think the QB situation in CHI (or lack thereof) will help to persuade Berrian to take his skills elsewhere. He put up decent #s despite below QB play where he was basically the lone speed guy on a running team. He is young at 27 and would probably command more $$$ than Johnson but both are really attractive for a team in need of experienced playmakers at WR. One of these guys should be wearing the fleur next season....

3. CB Marcus Trufant - probably will command $50-$60mil but we need CBs in a bad way!!! Mckenzie's knee injury late in the season brings about the realistic possibility that he may not be ready to go come training camp and he aint getting younger. Even once he gets back he will not be the same player in terms of speed and confidence after ACL surgery. I truly believe this is the reason the Saints may go hard for Trufant. Freddy T is over, which leaves Craft, David, and Young. Need I say more???? Deangelo Hall is another possibility via trade but his attitude is volatile and probably not what Payton is looking for.

Being that the Saints will probably target a DT in the draft Haynesworth is not a realistic possibility given the amount of $$$ he'll command. DT Williams will most likely be re-signed by GB given his youth and playmaking ability.

The Saints biggest need at LB is in the middle and there aren't any "impact" guys in FA worth given good money to, which is why the draft is going to be the focus here as well. Briggs plays the weakside where Shanle was just extended last offseason. Danny Clark should not have been let go last season IMHO, he would have been decent in the middle until we groomed a replacement(TBD). Maybe Sam Williams from OAK but even he would be just a stop gap. Suggs is a proto-type 3-4 rush end/LB, and Fujita mans the SLB. Suggs also will command big $$$ at 26 yrs old.

There are some promising young OL guys ready to step in and play. Faneca will also command crazy $$$, as will Jamal Brown and Evans, so I don't think he lands here either. I'd look hard at signing Ruben Brown from CHI as a veteran OG, and if not my suggestion is that the Saints play Evans and Brown on the same side and create a "strong" side instead of splitting the best two OL. Stinch and Goodwin(or Alleman) could hold their own on the other side (maybe add a veteran for depth).

This is how I see it. We really need CBs, MLB, DT. A veteran WR would be nice and another veteran OL. 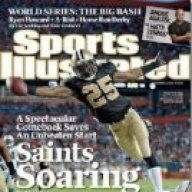 Offline
nice post i like the idea of bryant johnson i think he would be our # 2 and i hope we make a strong push for trufant as u say..nice work

Offline
I thought the Packers were not going to resign Williams. I've heard of Bryant Johnson's potiential and it would be nice to at least see what he can do. The chance at getting Trufant is low he costs a lot and so many teams will go after him. I don't think that Suggs is a need and we should not spend money like that on him. It would be nice to sign at least one expensive guy. I think it is fairly realistic that we can get DT Williams, WR Bryant Johnson, and a CB that can at least help us a little.
OP

Offline
I've seen so many different reports on Kenny Phillips itz hard to gauge his draft position. Some say safeties won't go that high this year, others say Phillips is a cant miss guy if you need one. Because UM puts out safeties that play at a high level, and this kid appears to be that, I think he may well be a possibility at #10 if Payton can nab a young DT in FA. I think the Saints may be able to slide down a few spots n that case, although that would not be my suggestion. I personally do not believe Dorsey or Ellis will be there at #10, and because the back end of the defense was a major liability last season Phillips may be the pick.

Offline
Shanle got a big contract last off season, jason david got big money, we can't afford to keep making mistakes like this, if we can't see talent lets hope for blind luck like colston in this years draft and FA
OP

SaintsJunkie said:
Shanle got a big contract last off season, jason david got big money, we can't afford to keep making mistakes like this, if we can't see talent lets hope for blind luck like colston in this years draft and FA
Click to expand...

Shanle's deal was cap friendly, even David's $16mil deal was not absurd because based on his play last season he probably won't see all of that. Now the guys we may have to sign this offseason will command BIG deals. Last offseason's conservative strategy was probably based on the fact that the FO knew more cap $$$ would be available this offseason.

Offline
Funny thing about Bryant Johnson... the Cardinals selected him with one of the picks we traded away to move up and take Jonathan Sullivan.

He would be an amazing pickup for our offense... I seriously hope we make him a real offer durring FA.

Offline
The best signing, cost to effect signing that is, will be Bryant Johnson. I have no faith in Meachem until he plays a regular season game. And having three WR threats (If Meachem proves his worth) will give us the ability to spread out defences and cut them inside-n-out.

Of course the most important signing there is Marcus Trufant.

Offline
Can I ask you guys a question about the possibility to inquire about the services of D Robertson? The Jets really don't need him, he isn't a 3&4 type DT.....would he be good enough in case the Packs resign Corey Williams?

What's also bad is that I thought we traded those picks to get Marcus Trufant.

Offline
I would rather the Saints go after Panthers WR Drew Carter over Bryant Johnson. They're both just about the same size, only Carter is faster and would come cheaper IMO. Don't get me wrong, I think Johnson is good... I'd just rather Carter.

wow! Thanks for reminding us punk.

DownWithDisease said:
I would rather the Saints go after Panthers WR Drew Carter over Bryant Johnson. They're both just about the same size, only Carter is faster and would come cheaper IMO. Don't get me wrong, I think Johnson is good... I'd just rather Carter.
Click to expand...

I rarely disagree with you DWD... but I have to here. Carter has done nothing in Carolina that would warrant anything more than possibly a place on our practice squad... Whereas Johnson would most likely be a solid #2 WR here. If you are talking strictly about cost... an argument could be made to bring in Cater rather than Johnson... but from a talent and production standpoint... Johnson >>>>> Carter.

IMO, Carter would not see the field 90% of the time, and would be a waste of time to even bring in.
Show hidden low quality content