Game Balls from the Saints Frying of the Falcons, 24-9 (1 Viewer) 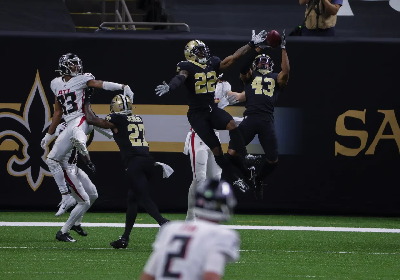 For the first time since 2005, the New Orleans Saints would face their archenemy, the Atlanta Falcons, without Drew Brees behind center. Saints head coach Sean Payton shocked most of the football world at mid-week when he announced that Taysom Hill would get the start for the injured Brees over the more experienced Jameis Winston.

Amid reports of a divided locker room over their preference at quarterback, the Saints responded with a dominant defensive and offensive performance in pummeling the Falcons 24-9.

Atlanta began this contest with a 65-Yd march, bolstered by a 45-Yd completion to WR Calvin Ridley, which ended with a short field goal. New Orleans would go three-and-out on their first possession, with Hill taking a sack on 3rd and short. The Saints defense took control of the game after that.

After that opening drive, New Orleans allowed just 183 yards through the rest of the game and held a potent Atlanta offense to only three field goals. The Falcons were just 2 of 14 on 3rd downs and had negative yardage in the third quarter. New Orleans sacked Atlanta QB Matt Ryan 8 times and intercepted him twice, putting a stranglehold on the game.