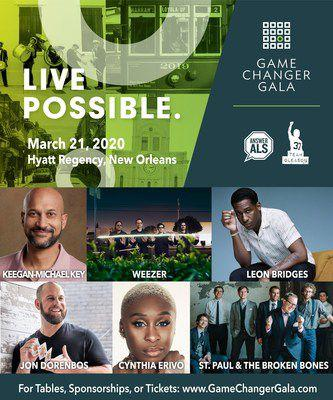 NEW ORLEANS, March 2, 2020 /PRNewswire/ -- The Game Changer Gala and its Co-Chairs, Gayle Benson and Drew Brees, are excited to announce the lineup for the 2020 event in New Orleans on March 21. The Game Changer Gala helps raise critical funds for ALS research and patient empowerment, supporting both Team Gleason and Answer ALS. Team Gleason strives to provide solutions for those living with ALS now and Answer ALS is the single largest coordinated and collaborative effort to end ALS in the history of the disease.

Emmy and Peabody Award-winning writer, actor, and producer Keegan-Michael Key will Emcee with Grammy award-winning artists Weezer, Leon Bridges, and Cynthia Erivo. Illusionist and finalist on America's Got Talent Jon Dorenbos will perform, as well as the incredible St. Paul and the Broken Bones. There will be other surprises, but the lineup is one not to miss!

"I am a fan of every person and group who agreed to join us at the Gala," said the founder of both organizations, Steve Gleason. "That some of the biggest names in entertainment chose to come together for this cause is just extraordinary," Gleason continued. "While the goal of the event is to help us further solutions to ALS, it was important to Michel and me that this event also be a celebration of the possible."