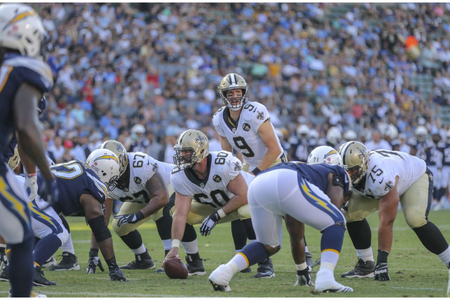 Carson, Calif. - Quarterback Drew Brees made his debut of the 2018 preseason Saturday night at the StubHub Center but more eyes were on another New Orleans Saints player seeing his first action: first-round pick Marcus Davenport.

The 6-foot-6 defensive end out of Texas-San Antonio didn't play in the first two preseason games but entered in the first quarter and by all accounts made a successful debut in the Saints' 36-7 victory over the Los Angeles Chargers (1-2). Davenport, who initially saw the field as a temporary replacement for a shaken up Trey Hendrickson, was credited with a half-sack and three tackles.

Brees didn't have his greatest outing - 7 of 9 for 59 yards and one interception - but backups Tom Savage and Taysom Hill eached played well. Hill got things started with a fake punt conversion and then added a rushing touchdown, a 2-point conversion (one of three for the Saints on Saturday) and a bullet touchdown pass to rookie Tre'Quan Smith. Savage, who replaced Brees, was an efficient 7 of 10 for 99 yards and hit Tommylee Lewis on a very nicely thrown deep ball for 36 yards.