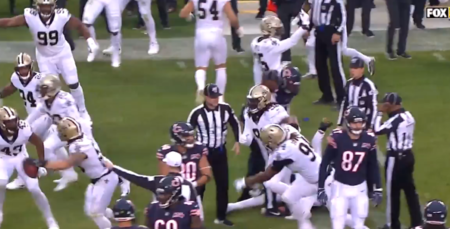 Chicago - Just like the vast expanse of fog that blanketed downtown Chicago and Soldier Field on Sunday afternoon, the New Orleans Saints defense, clad again in their all-white uniforms, swallowed another NFL offense, this time the Chicago Bears and quarterback Mitchell Trubisky.

It was the fourth consecutive game the defense has suffocated an opposing offense, strangling any signs of life with a strong pass rush, sure tackling and step-for-step pass coverage. After holding Dallas, Tampa Bay and Jacksonville to an average of 245 yards per game, the defense stayed the course vs. the Bears, limiting them to 252 yards of offense. It took the Bears until the fourth quarter to break the 100-yard mark.

The result: a 36-25 victory, the team's fifth consecutive. Sunday's result - which wasn't as close as the final score indicated, the Bears (3-3) recovered an onside kick late in the game - was all the more impressive considering which players weren't on the field. Franchise quarterback Drew Brees missed his fifth consecutive game and he was joined on the sideline by star running back Alvin Kamara and tight end Jared Cook, the team's prized pickup in free agency. ...