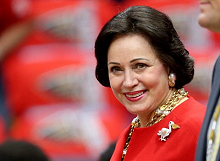 It isn't often when Gayle Benson raises her voice, but when she did six years ago with Ken Trahan on the other end of the phone, he responded.

Tom Benson, then the New Orleans Saints owner, had just been inducted into the team Hall of Fame during a ceremony two days earlier. Also inducted that day was former running back Deuce McAllister.

That Sunday, with McAllister scheduled to sign autographs in the Hall of Fame exhibit before a game at the Mercedes-Benz Superdome, Gayle Benson called Trahan, the Hall organizer, to ask if he wanted her husband to join him.