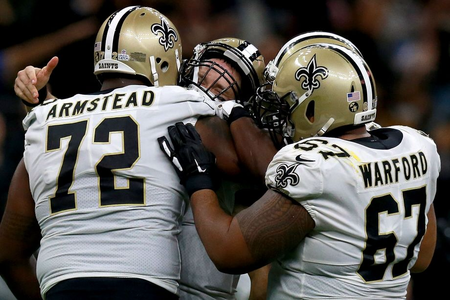 Retired NFL lineman Geoff Schwartz takes a look at which OLs are getting it done, which aren’t, and who had the nastiest blocks last week.

Welcome back to Disrespectful Blocks of the Week! It’s a day later than usual (thank you, old neighborhood with even older trees falling on power lines in a storm), but it’s back with a new format. No longer will I just write out what I’ve said in the blocks video because that’s um, boring. I’ve already said everything in the video.

The video will be attached at the bottom of this article so you can still watch, but the new format is simple. I’m going give y’all the top and bottom offensive lines in the NFL, with a unique take on the offensive lines that are playing well.

Important note: this isn’t a ranking. Ranking offensive lines is tough when there’s not a clear No. 1, as there has been in years past.

I’m always going to start with the best of the units. Here they are after the first five weeks — again, in no order.
The six best offensive lines right now in the NFL

New Orleans Saints: I LOVED this unit last season and they have continued where they left off. Their offense was without Mark Ingram for the first four weeks, but no worries, they kept chugging along. They’re currently third in adjusted rushing rate and fifth in least amount of times stuffed in the run game, according to Football Outsiders. ...